Living in the UK is so great! Last week I got on a plane at Luton and barely an hour later was on a smaller, greener island with super friendly (not to mention lovely-sounding) people and delicious soda bread for me to try. That’s a bit of a novelty for an Antipodean like me!

Our Science and Technical Manager Marc Naura and I were off to Cookstown in Northern Ireland to deliver a training course, but I snuck across the Irish Sea a couple of days early to explore the famous Causeway Coast and a few lovely little pockets of countryside. Definitely not enough time though – I’ll be making an excuse to go back again.

But on to the training course. The generous support from the Esmée Fairbairn Foundation allowed us to deliver a beginner course on river restoration free of charge to small rivers trusts, angling groups and community volunteers interested in improving Northern Ireland’s rivers. This was hosted by the Ballinderry Rivers Trust, who through their work have been promoting the improvement of the Ballinderry River and its tributaries for over 20 years. Mark Horton and the team have some exciting projects going on involving breeding pearl mussels, trout and salmon, as well as silt reduction and other improvements throughout the catchment.

Mark and Marc (with conveniently different name spellings) and I worked hard over the last couple of months to develop a jam-packed programme for the participants that touched on how rivers work, river restoration project planning, a range of simple and cheap monitoring techniques and plenty of example river restoration projects for inspiration. There were also some other relevant presentations that provided more contextual information and links to others working in the same space. The objective was to provide an introduction to important elements of river restoration, some inspiration to get started and plenty of resources to help them along. 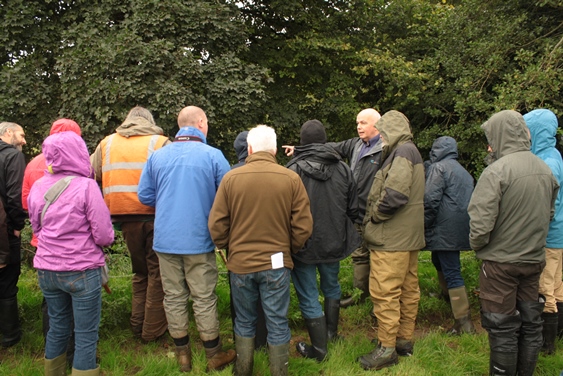 The course was very well subscribed – in fact, it was one of the first courses we’ve ever done where the number of people who showed up on the day exceeded the number who said they would! We almost ran out of chairs and food, but there was definitely no shortage of enthusiasm. The participants seemed to really enjoy the sessions; there was lots of interactive discussion and there have been some very nice words in the feedback forms which is great. One of the unintended benefits has been networking opportunities – lots of new connections were made amongst different groups interested in river restoration across Northern Ireland and the Republic of Ireland.

Thanks very much to everyone who contributed to the day, both in organisation and participation. I’m looking forward to delivering the next two, in Wales and Scotland, next year.