Tweed Forum, the charitable trust that looks after the 5,000 sq km catchment of one of the world’s most famous salmon fishing rivers – the River Tweed - is celebrating 30 years of environmental action.

The River Tweed is a Site of Special Scientific Interest (SSSI) and Special Area of Conservation (SAC) and while the main river channel is well known, it contains some significant tributaries including the Teviot, Ettrick, Gala and Leader Waters, the Whiteadder and the River Till as well as many smaller watercourses amounting to 12,500km in total. 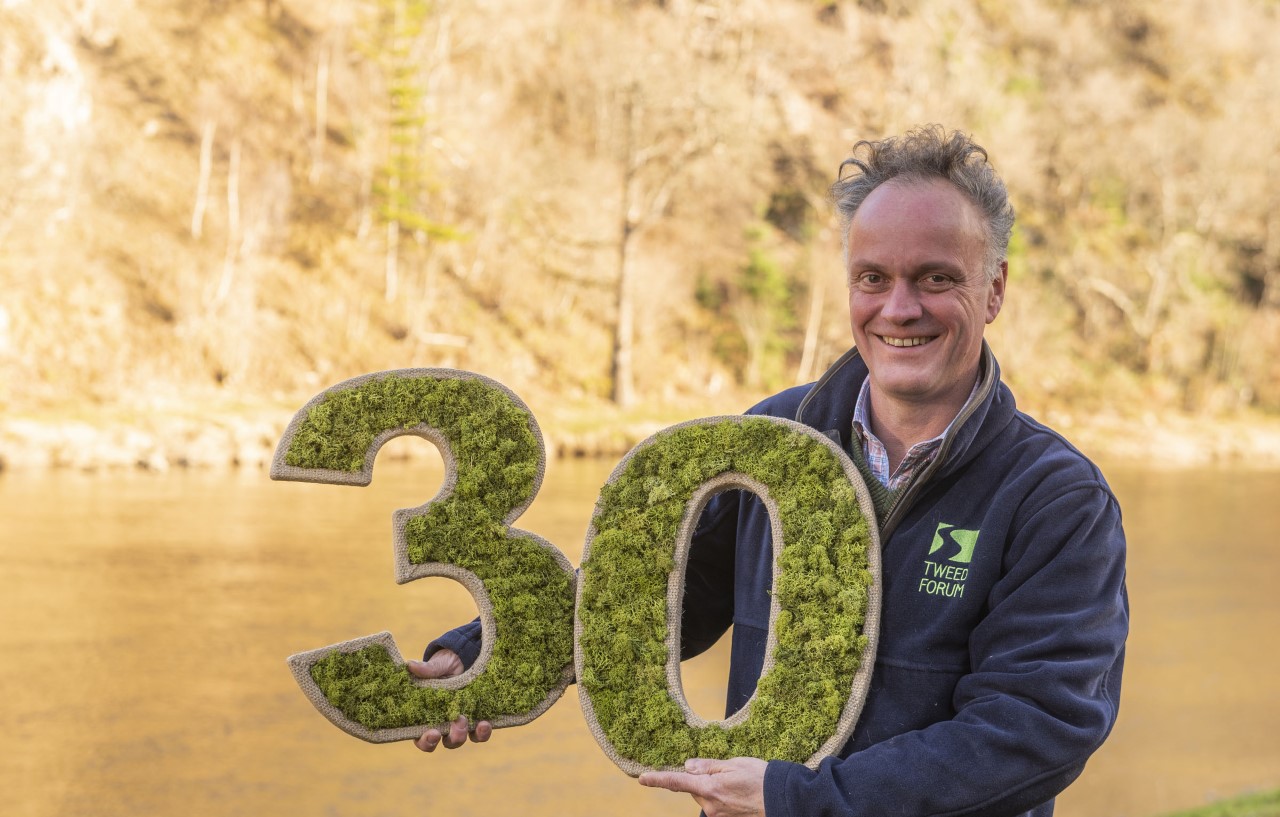 Effectively formed in 1991 to address a single issue – the removal of gravel from a river channel, Tweed Forum has developed into an award-winning, cross-border environmental partnership of 25 public and private sector organisations that focuses on getting practical work done on the ground. It also advises government bodies, policy-makers, landowners and farmers on a range of land and water management issues.

Its small team of ten also works with farmers, foresters, landowners, ghillies and other relevant organisations to introduce measures that deliver a range of important benefits that improve the environment throughout the river catchment, enhancing habitat for wildlife including salmon and otter, delivering improved soil and water quality, helping to combat the effects of the climate change and biodiversity crises and providing tourism and recreation opportunities in the surrounding areas.

Over three decades, Tweed Forum’s impressive achievements have included planting over 1.3 million trees, creating or restoring 266 ponds and wetlands, enhancing 300 km of river, improving 4604 ha of peatland and creating 331km of stock exclusion fencing to address riverbank degradation. Many kilometers of channelised river have been remeandered. All this helps protect and enhance the building blocks upon which the world-famous salmon fishery is based.

Over 400 ha of floodplain and wetland have been restored and 236 engineered log jam structures installed to reduce flooding. An extensive campaign targeting non-native invasive plant species across the catchment is in its 20th year and has led to very significant reductions in the growth of Giant Hogweed and Japanese Knotweed on the main river channel and tributaries.

In partnership with Scottish Government, the University of Dundee and the local farming community, Tweed Forum has also led the internationally-significant Eddleston Water project, a living laboratory on one of the River Tweed’s tributaries that aims to provide evidence of natural flood management techniques. These aim to enhance flood resilience through the restoration of habitats and natural processes that slow water flows, increase the amount of water stored in the landscape and so help to reduce the risk of flooding to communities downstream, while simultaneously improving the biodiversity of the river catchment. This ongoing project has already hosted a plethora of high-profile events and featured in a raft of significant publications from

organisations including the Worldwide Fund For Nature, the USACE (US Army Corps of Engineers) and the British Ecological Society*.

Through Tweed Forum’s outreach activity, over 46,000 people, from Ministers to school children, have been engaged and learned about natural land and water management techniques at conferences, agricultural shows, site visits and through talks.

Tweed Forum has also helped to restore 23 listed buildings and scheduled monuments within the catchment from peel towers to packhorse bridges. Almost 2,000 km of paths have been created or upgraded, with 105 interpretation boards added to enhance user experience. Through the Destination Tweed project, the organisation is also leading local efforts to create a new, 100-mile source to sea walking and cycling route that has the potential to become a jewel in the Scottish Border’s tourism crown and deliver multiple economic, environmental and social benefits for the region.

The anniversary comes in a year when environmental issues have been at the forefront of world attention, and when climate change is climbing up the priority list for an increasing number of people. A YouGov poll in November 2021 reported that 40% of Britons now say that the environment is one of the top three issues facing the nation when prior to 2018, this figure rarely topped 10%*.

Tweed Forum Director, Luke Comins said: “When Tweed Forum was first formed, climate change was just beginning to register in the public’s consciousness and our work was either opportunistic or concentrated on single issue problems. Since the creation of our Catchment Management Plan in 2003, our focus has been on developing a coordinated and targeted programme of nature-based solutions that allow us to address a multitude of issues - protecting nature as well as unlocking its power to tackle the effects of climate change and deliver numerous environmental, economic and social benefits for local people.

“Given that scientists now estimate that nature-based solutions could contribute around 20% of the mitigation needed between now and 2050 to keep global warming below 2 degrees, we’re delighted that people and policy-makers have come to appreciate the vital nature of our work,” he said.

Partnership with everyone who has an interest in the river – from public and private organisations to farmers, landowners and the local community - is crucial and Tweed Forum’s collaborative approach to the management of the river and its surroundings led to UNESCO recognition in 2009 and the receipt of the first UK Rivers Prize in 2015. The organisation was runner-up in the 2017 Thiess International River Prize, whose previous winners include the Rhine and the Danube, and it has also won a number of Scottish awards.

Luke Comins continued; “Partnership is key to our success. It isn’t always the easiest way of working, but it’s vital if we’re to successfully address the complex issues affecting the river network, ensuring that the right measures are being delivered in the right place and at the right scale. We’re tremendously proud of all that we’ve achieved, but our focus remains on encouraging the adoption of nature-based solutions on a catchment scale so they make a meaningful impact. With temperatures set to rise and extreme weather events becoming more frequent, our work is increasingly important.”