May 23 — Places still available on the upcoming 'Advanced Hydromorphology' training course June 8th, Online Find out more… https://t.co/d4Mhj1RpzO
May 23 — RT @MICSproject: Across which domains does #CitizenScience have #impact? Take a look at this paper outlining guiding principles for… https://t.co/gq7sftlmQ8
May 18 — Still time to submit a Poster abstract for the 2022 RRC Conference taking place next month in Warwickshire. Showca… https://t.co/bPe2FQegdP 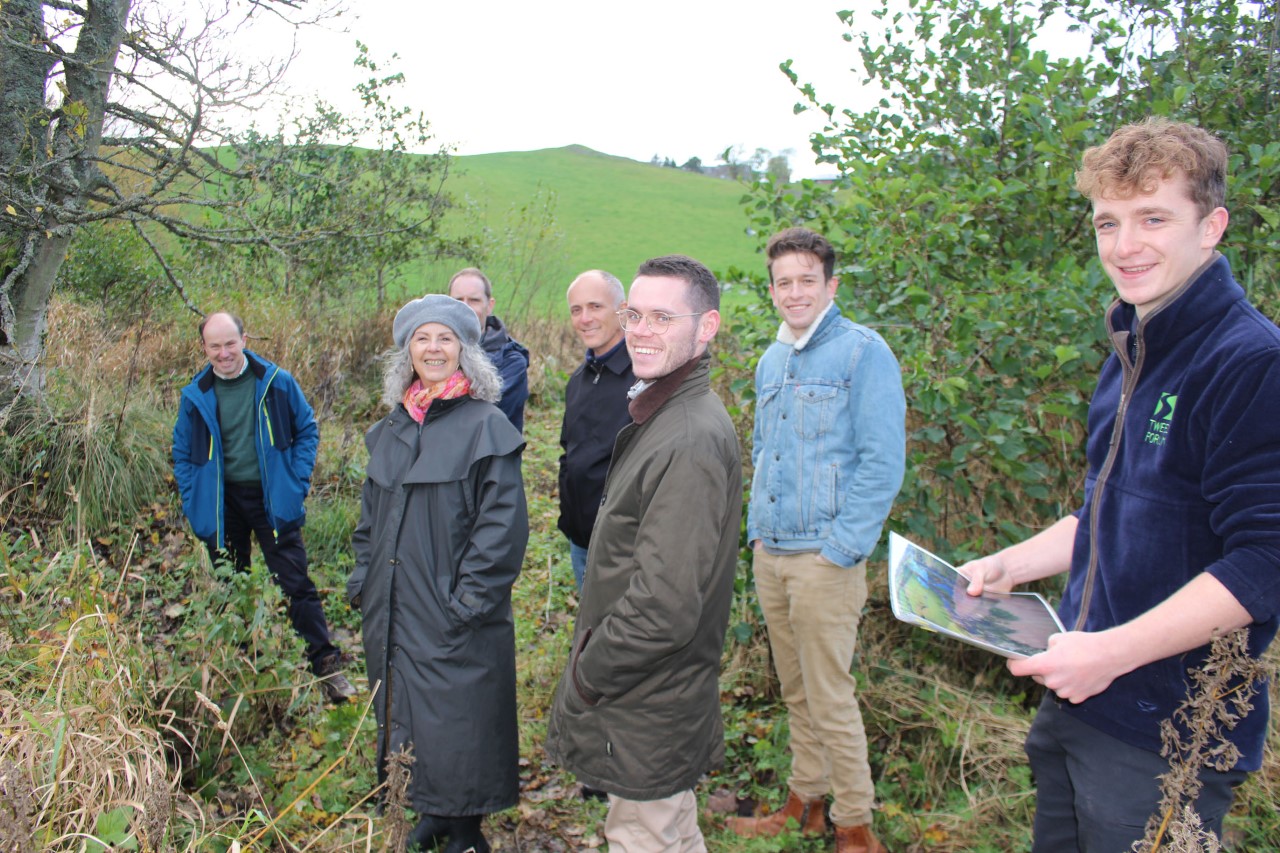 A group of international and UK COP26 participants took time out from the conference in Glasgow to visit Tweed Forum’s Eddleston Water flood resilience project.

Funded by the Scottish Government, EU Interreg and the Scottish Environment Protection Agency and delivered in collaboration with the University of Dundee and, most importantly the farmers and local community, the Eddleston Water Project is of international significance. Marking its 10th anniversary this year, the initiative is a living laboratory that is collecting evidence of the benefits of Natural Flood Management techniques. These aim to enhance flood resilience through the restoration of natural processes that slow water flows, increase the amount of water stored in the landscape and so help to reduce the risk of flooding to communities downstream, while simultaneously improving the biodiversity of the river catchment.

Climate change is expected to increase the frequency of extreme weather events such as flooding and while there is growing interest in Natural Flood Management measures, until now there has been a lack of evidence as to how much they can contribute, and which techniques work best.

The COP26 participants taking part in the site visit, which was organized by the UNESCO Centre for Water Law, Policy and Science, included representatives from the International Water Resources Association, Texas A&M University and the Universities of Birmingham, Dundee and Strathclyde.  The Eddleston Water project has already featured in a raft of high-profile publications including the Worldwide Fund For Nature’s Forests for the Future Report, the USACE (US Army Corps of Engineers) Engineering with Nature Atlas and the British Ecological Society’s recent report: Nature-Based Solutions for Climate Change in the UK.

Measures implemented across the 69km2 Eddleston Water catchment include the creation of 38 new ponds to catch surface water flow and hold water back.  Over a hundred engineered log structures have been created on streams in the upper catchment. Built to allow fish to pass underneath, these slow excess water by directing it into land on either side of the river channel. Over 330,000 native trees have also been planted across the catchment. As well as having a positive impact on ecology and sequestering carbon, in time these will also aid water infiltration in upstream areas where floods are generated and will help to slow overland water flows.

Further downstream, some 3km of the Eddleston Water have been re-meandered. Straightened over 200 years ago, these sections of the main channel now contain more habitat for species such as salmon and trout, with deep pools, active gravel bars and newly planted trees increasing habitat diversity and also helping to provide cooler water to counter rising river temperatures and aid fish survival.

Recent results for the project have shown reduced peak water levels downstream during heavy rain as well as a delay of up to 7 hours in the timing of river peaks, which gives people more time to prepare and take action. There has also been a recovery in the diversity and numbers of aquatic invertebrates which is currently being scientifically assessed. All of the measures have been introduced in partnership with local landowners, farmers and foresters to ensure that the work can be successfully integrated into their existing businesses.

The costs and benefits of the work are also being assessed and it is estimated that almost £1 million worth of flood damage will be avoided in downstream communities by the impact of the measures already installed. The value of other benefits, including improved water quality, carbon management and biodiversity is estimated at £4.2 million.

Luke Comins, Director, Tweed Forum said; “Natural Flood Measures will not replace traditional, hard engineered flood defences, but they can augment them and increase resilience to extreme weather events. We were delighted to showcase this important project to COP26 participants and to be involved in an initiative that is providing vital evidence of the effectiveness of working with nature to deliver solutions that can be used in countries across the globe.”

Professor Chris Spray, University of Dundee said; “The Eddleston Water is now a unique catchment laboratory that is already starting to demonstrate the types of approach that, when applied throughout a wide catchment, can appreciably reduce flood risk. The advantages for plant and wildlife biodiversity are also huge and while the full results will take many years, the benefits we have measured already are very exciting.  We hope that the lessons learned here can inform work elsewhere and make communities, land and infrastructure more resilient to future flood events.”