Sep 25 — https://t.co/55OhqEFedc
Sep 25 — Did you catch this re-run on @BBCEarth @WildlifeMag last night? 'The River Wye with Will Millard'… https://t.co/8Ks4FgDpy3
Sep 24 — The first online training version of 'Developing a Catchment-wide restoration plan' is underway!… https://t.co/FHcc6nPIK8

Woods for Water on the River Test

Having attended the first stakeholder group meeting with the newly formed Test and Itchen Catchment partnership, it was great to see them celebrating the first year with a 'Rivers Week' for partners. It was a good excuse to see more of the River Test too. The 'woods for water' afternoon was hosted at  Timsbury Fishing with a series of talks, first by staff from the South Downs National Park, the Woodlands Trust and the Hampshire Wildlife Trust, who co-host the Catchment Partnership with the Wessex Chalk Stream and Rivers Trust. These covered some of the advantages of riparian trees that we are familiar with – stabilising banks, shading the stream (important in the south) and enriching the biodiversity as well as providing a natural source of woody features. A new one to me was protecting the river from pesticide spray drift.

The South Downs National park has also been mapping the benefits of tree planting off river, using opportunity mapping to locate optimum areas for trees to reduce nutrient loss (nitrate leaching and phosphate/sediment run off) and thus protect source protection zones. As in the Poole Harbour Catchment and South West (West Country Rivers Trust) these maps help ensure that measures delivered for one problem achieve the most benefits. The South Downs’ map shown received great reviews in communicating the catchment issues to the audience.

Out on the riverbank we admired the classic chalk fishing beat at Timsbury where a plantation of poplars, originally planted for matchsticks, had been hastily reduced after some near misses from rotten branches. In keeping with the Woods theme, the Poplar removal had been followed by some more sympathetic planting with native trees (including sallow, willow, alder and hawthorn) supported by the rotary club volunteers. With a small scrape holding ground water, it is hoped that the local reeds will move in too, forming a natural wet woodland just back from the river’s edge. There was much discussion on how to protect the young trees, especially from deer grazing.

This woodland reinstatement followed a nearby reed swamp and pond development which formed when a drainage ditch collapsed. This now provides a home to a range of water birds in the drained river valley and shows what can also be achieved by doing nothing but leaving it to nature. Hopefully the wet woodland will work as well and the Rivers Week will encourage more of the partners on the Test and Itchen to promote woodlands to help rivers. 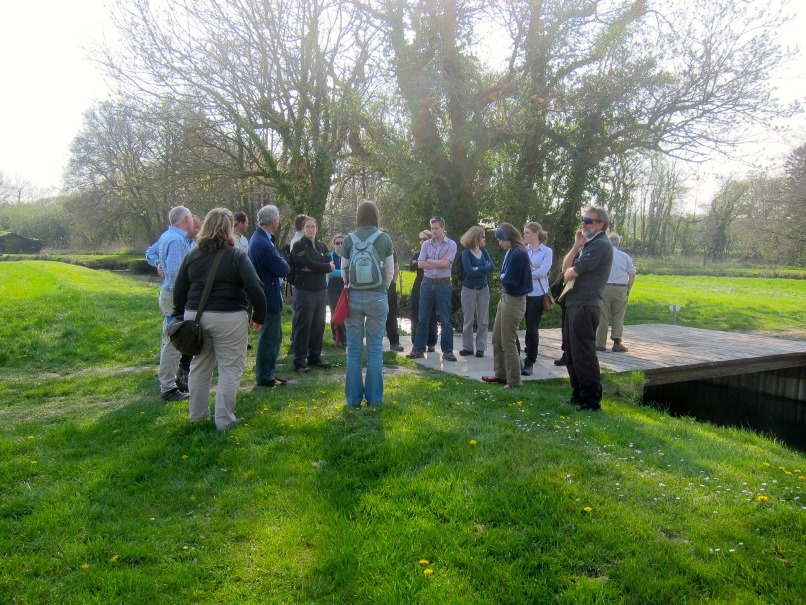